How Captcha Works and Why It’s So Important (Updated) 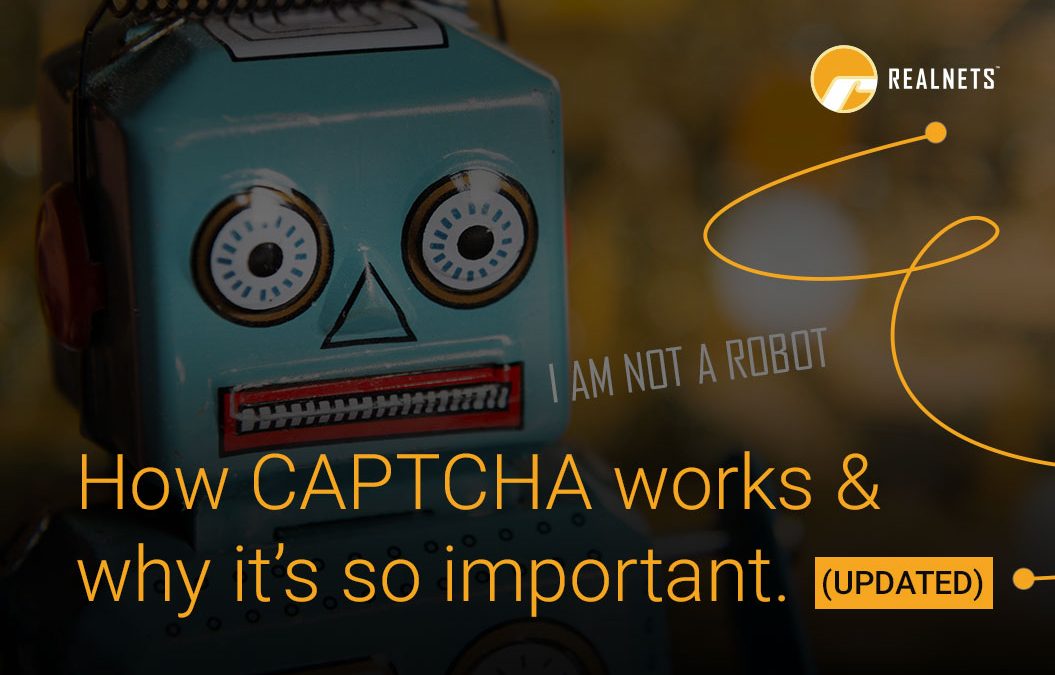 We’ve all been confronted by squiggly letters or pictures of traffic lights while trying to get on with our online business. These CAPTCHAs can seem pretty silly, but how do they work?

CAPTCHA stands for Completely Automated Public Turing Test to Tell Computers and Humans Apart. An acronym that is every bit as catchy as you’d expect from a programmer. These tests are a commonly used technology that checks if users are human or malicious bots.  CAPTCHA makes this distinction by relying on specific traits that only humans possess.

What does CAPTCHA do?

CAPTCHAs are widely used throughout the web to protect users from bots, spam, and malicious attacks.  Unfortunately, there are people out there who want to harm user websites and systems for all kinds of reasons. It can be to stave off competition, unwelcome advertising, or simply express destructive behavior.  CAPTCHA is a means to counteract these attacks and trust us when we tell you that this is one technology that is truly doing us all a favor.

The DDoS (distributed denial of service) attacks are the most basic example of what CAPTCHA technologies work to fend off.  These attacks are specifically designed to overload resources. Those staging these attacks, send out large numbers of requests to a given server, overwhelming it, and therefore making it incapable of returning results.  It essentially floods and shuts down your website.

Now, the fundamental concept that you need to understand here, though, is that actual humans are not sending out these attacks, as it would simply be too time-consuming to send out that sort of a large number of requests at one time.  Computers are doing all of the work in this scenario by sending out hundreds of requests every single second.  It is this unusual behavior that CAPTCHA helps to identify and block.

Where did CAPTCHA come from?

The concept was first developed at the beginning of the twentieth century. Someone posed a question as to whether or not computers are capable of thinking on a human level.  That’s when the imitation game, known as the Turing Test, was first used. All of you who remember Benedict Cumberbatch playing Alan Turing in a movie called The Imitation Game are probably feeling very smart right now.

TheTuring Test used a series of questions and both had to respond. The interrogator would use these answers to determine which participant was human and which was a machine.

Today, CAPTCHA technologies are a simple solution to a complex issue.  When you visit a website, a window may pop up asking you to enter some data or perform an action.  You then confirm it by passing a CAPTCHA test.  Most of us are familiar with the version where you type in a combination of letters and/or numbers that are wiggly and distorted.  Computers and bots can’t easily recognize distorted words, numbers, or letters.  Humans are incredibly sophisticated when it comes to processing visual data, but computers tend to be much more strict and literal.

Why is CAPTCHA so important?

CAPTCHAs create hugely significant barriers between us and those looking to cause mayhem.  They are so simple and take very little time away from the user but accomplish great feats with just simple algorithms.  Just think.  Without these technologies in place, humans, computers and bots would have the power to just take over, sending constant attacks on users’ systems, websites, and the entire  “Internet of Things”!   So, next time a CAPTCHA screen pops up on your computer, don’t be annoyed by that little extra step; it’s there for your benefit.

Are you ready to add CAPTCHA to your website’s security arsenal? If so, our team can help, and we’ll offer additional suggestions for keeping your website and your visitors safe.